The health benefits of nutmeg oil include its ability to treat stress, pain, menstrual cramps, heart disorders, indigestion, blood pressure, cough and bad breath. The health benefits of nutmeg oil can be attributed to its medicinal properties such as its role as a sedative, stimulant, relaxing, anti-inflammatory, antiseptic, and bactericidal substance.

The nutmeg tree grows very tall and may reach up to seventy feet in height. Nutmeg oil is obtained from the seed of the nutmeg tree fruit. The fruit, when dried, produces nutmeg (the seed) and mace (the covering). Traditionally, nutmeg was believed to be effective against the plague and hence it was popular during the Elizabethan era.

The health benefits of nutmeg oil include the following:

Pain relief: Nutmeg oil is very useful for treating muscular and joint pain as it is an excellent sedative. Nutmeg oil is also anti-inflammatory, so massaging nutmeg oil on the affected area is an effective treatment for arthritis, rheumatism, and lumbago. Nutmeg oil is an essential part of Chinese medicine when it comes to treating abdominal pain and inflammation. It also reduces swelling of the joints. Often, overexertion leads to body or muscle ache, and in such cases, nutmeg oil can be very useful in removing the pain. 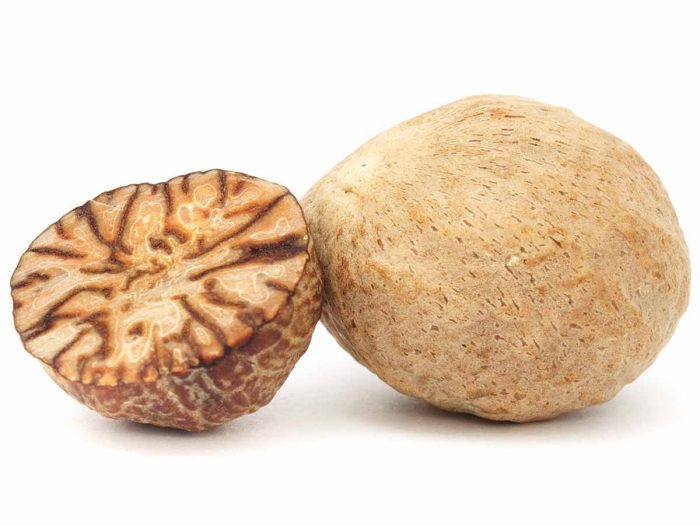 Menstrual Cramps: Some women face menstrual irregularities and suffer from menstrual cramps. Nutmeg oil is very helpful for these women, and it can also reduce the associated symptoms of periods like mood swings, depression, and hormone imbalance.

Indigestion: Nutmeg oil is good for digestion and helps in relieving stomach aches and removing gas from the stomach and intestines. Therefore, nutmeg oil is good for indigestion, flatulence, vomiting, and diarrhea. It also encourages an increase in appetite. Care should be taken when consuming nutmeg oil, and it should only be applied internally in low doses.

Blood Circulation: Nutmeg oil is a good stimulant, not only for the mind, but also for the rest of the body. Its relaxing aroma comforts the body, increases blood circulation and therefore helps those who have poor blood circulation.

Respiratory Problems: Nutmeg oil forms an important ingredient in many cough syrups and cold rubs as it helps in relieving congestion and cold symptoms. It is also believed that nutmeg oil can be used for treating asthma.

Brain tonic: Nutmeg oil stimulates the brain and therefore removes mental exhaustion and stress. It is also believed that nutmeg oil improves the quality of your dreams, making them more intense and colorful. It is a good remedy for anxiety as well as depression. Nutmeg oil is often used in homeopathy. In the ancient Greek and Roman civilizations, nutmeg was popular as an effective brain tonic in spite of its high cost and rarity. Nutmeg oil also enhances concentration and increases your overall efficiency at study and work.

Heart Problems: Nutmeg oil can also stimulate the cardiovascular system and is therefore considered a good tonic for the heart.

Bad Breath: The woody aroma of nutmeg oil helps to remove bad breadth. It is also antiseptic in nature and is effective for toothaches and aching gums. As a result, it is also added to numerous toothpastes and mouthwashes.

Liver Tonic: An important health benefit of nutmeg oil is its ability to treat liver disease. The oil is capable of removing toxins from the liver, thereby making it a good liver tonic.

Kidney Health: Nutmeg oil is often recommended for treating kidney infections and kidney diseases. It also helps in dissolving kidney stones and accumulations of uric acid in other parts of the body, like those which lead to gout and joint inflammation.

Other Benefits of Nutmeg and Nutmeg Oil

Spice: The herb is very popular as a spice and is often used in culinary purposes. In cooking, nutmeg is versatile and can be used in potato dishes and meat preparations in Europe, garam masala in India, and as a curry ingredient in Japan.

Incense: Nutmeg is used in various incense sticks due to its woody fragrance. It is also believed that Roman priests used to burn nutmeg as incense.

Flavor: Nutmeg, or Jaiphal as it is called in Hindi, is a very popular flavoring agent in making sweets in India. It is also used in baked goods, sauces, ice cream, and custards. Certain coffee drinks, including cappuccino, are flavored using nutmeg and cinnamon.

Soaps: The antiseptic properties of nutmeg make it useful in the manufacturing of antiseptic soaps. Nutmeg essential oil is used for bathing as well, due to its refreshing nature.

Cosmetics: Since nutmeg oil is antibacterial and antiseptic, it is used in many cosmetics meant for dull, oily or wrinkled skin. It is also used in making after shave lotions and creams.

Room Freshener: Nutmeg oil can be used as a room freshener, again due to its woody and pleasant aroma.