The health benefits of peppermint oil include its ability to treat indigestion, respiratory problems, headache, nausea, fever, stomach and bowel spasms, as well as for pain relief. Due to the presence of menthol, menthone and menthyl esters, peppermint and peppermint oil find wide applications in the manufacturing of soap, shampoo, cigarettes, toothpaste, chewing gum, tea and ice cream.

Peppermint is a cross between watermint and spearmint and is native to Europe. Historically, the herb has been known for its medicinal uses, and its impressively long history often gives it the prestigious title as the world’s oldest medicine.

Unlike many other herbs and essential oils, numerous health benefits of peppermint and peppermint oil have been studied and proved by the scientific community. As a result, peppermint oil is also sold in the form of capsules and tablets, and is even prescribed by doctors of alternative and modern medicine.

Peppermint oil can also be used as a flavoring agent. You will find very few people who find peppermint unsuitable to their palate. Peppermint oil contains numerous minerals and nutrients including manganese, iron, magnesium, calcium, folate, potassium, and copper. It also contains omega-3 fatty acids, Vitamin A and Vitamin C.

The health benefits of peppermint oil include the following:

Indigestion: Peppermint oil is very helpful as an aid for digestion. People often put a few drops of peppermint oil in a glass of water and drink it after their meal for its beneficial digestive properties. It is carminative and therefore helps in removing excess gas. Peppermint oil is also a good tonic for those who have a low appetite, and it helps treating motion sickness, nausea and upset stomachs. Preliminary research has proved that peppermint oil, when combined with caraway oil can be used for treating heartburn.

Peppermint oil can relax the smooth muscles of the GI tract, which is why it is so commonly a component of “over-the-counter” medications. A number of studies have also shown it to be a great reliever of Irritable Bowel Syndrome (IBS), which affects millions of people every year and is characterized by abdominal pain or discomfort without any other diagnosed disease. Further research still needs to be done on the exact mechanism by which this occurs, but numerous studies have validated these effects. 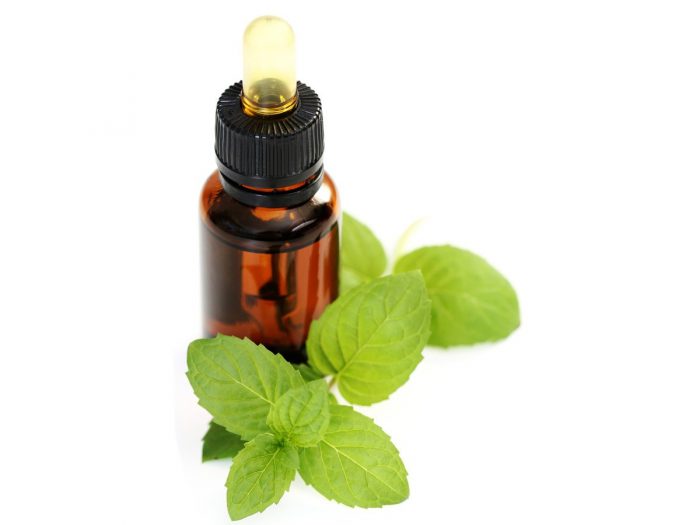 Dental care: Peppermint oil, due to its antiseptic properties, is very useful in dental care. It also eliminates bad breath and helps teeth and gums fight off hazardous germs. Unsurprisingly, these attributes mean that peppermint oil is added to numerous toothpastes, and it is also been shown to be useful in the treatment of toothaches. At times, the inhalation of peppermint oil vapor can be anti-inflammatory and pain relieving, so it can even be added to postoperative oxygen, particularly after oral surgeries.

Nail Care: The antifungal properties of peppermint oil are well studied, and there is significant research that shows peppermint oil, when topically applied, can reduce the chances of fungal nail infection, which affects many people around the world.

Nausea and headache: Peppermint oil is a good home remedy for nausea and headaches. To quickly alleviate the pain of a headache, simply apply peppermint oil in a diluted form directly on the forehead. Inhaling peppermint oil can eliminate the effects of nausea and motion sickness, simply because of its relaxing and soothing effects. Its cooling and anti-inflammatory properties are part of the reason why it is so successful at relieving headache symptoms, and it is even used to reduce the pain of migraines in certain patients within 15 minutes of topical application, according to a study done in 2007.

Stress: Like most other essential oils, peppermint is able to provide relief from stress, depression and mental exhaustion due to its refreshing nature. It is also effective against anxiety and restlessness. Furthermore, it stimulates mental activity, clears the mind, and increases focus on cognitive tasks.

Antispasmodic: Peppermint oil is very effective for gastroscopy, colonoscopy and during double-contrast barium enema, where it is applied intraluminally. Further benefits of peppermint oil that might stem from its antispasmodic properties are being studied.

Respiratory problems: Menthol, which is abundantly present in peppermint oil, helps to clear the respiratory tract. It is also an effective expectorant and therefore provides instantaneous, though temporary, relief for numerous respiratory problems including nasal congestion, sinusitis, asthma, bronchitis, cold and cough. As a result, it is used in numerous cold rubs and balms. When these cold rubs are applied to the chest, they can quickly remove nasal and respiratory congestion. In one study, the use of peppermint oil proved to be antispasmodic, expectorant, and anti-inflammatory in nature, and considerably soothed the trachea inflammation and coughing in rats. Obviously, more human-based studies need to be made, but it has been a frequent part of alternative medicine for generations, and is highly respected for its use in relieving respiratory issues.

Pain relief: Peppermint oil can be used externally in order to provide relief from pain. It is believed that the presence of calcium antagonism in peppermint oil helps remove pain from affected areas. It is also cooling in nature and is subsequently used to help reduce fever. It is frequently called a “refrigerant”, meaning that it can provide an intensely cold sensation to any affected area. In case of injury, wound, or healing process, topically apply peppermint oil to the area to reduce swelling, relieve pain, and eliminate the chances of uncomfortable inflammation.

Immune system: Peppermint oil can increase a person’s immunity to various diseases and is commonly employed by those people with weak immune systems or who seem to frequently suffer from illness. Peppermint oil is also known to have powerful antiviral, antibacterial, and antifungal effects, which is why it is used in so many alternative treatments. It is composed of camphor, menthol, and carvacrol, which are resistant to certain dangerous bacterial strains like E. coli, salmonella, and staph infections. The full range of resistance to bacteria is not quite known yet, but studies continue all the time.

Hair care: Peppermint oil is very useful for hair care as it gives a cooling effect to the head, while removing dandruff and lice. Peppermint oil has antiseptic, regenerative, and stimulating effects, which means that it can relieve the scalp of irritation and dry skin, stimulate hair growth for those suffering from baldness, and give relatively healthy hair a shiny, fresh look. Peppermint oil can be found in many hair products and alternative solutions for baldness, dandruff, and other hair-related conditions.  Increasing blood circulation to the scalp can also promote healthy hair growth.

Skin care: Peppermint oil contains menthol, which is good for the skin because it creates a cooling sensation. Furthermore, it nourishes dull skin and improves the texture of oily or greasy skin